Review: Tennessee Williams’ One Arm – a powerful meditation on absence and presence 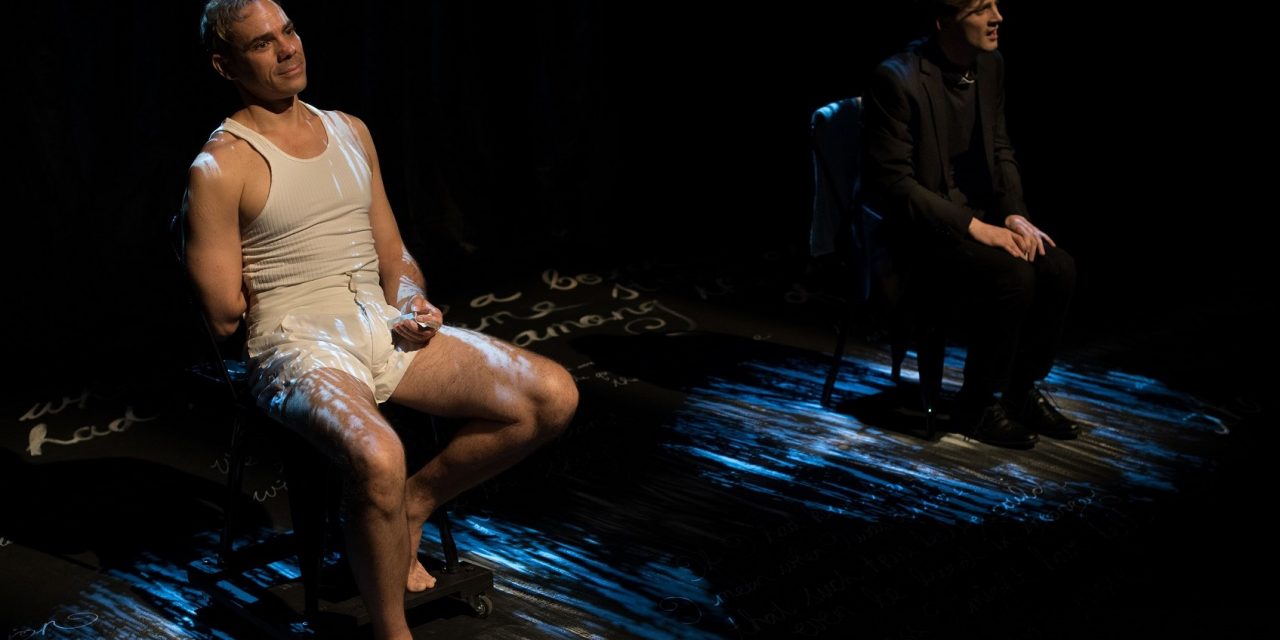 Review/reflections: Abrahamse & Meyer’s staging of Tennessee Williams’ One Arm – a powerful meditation on absence and presence

Cape Town theatre company, Abrahamse & Meyer Productions is presenting One Arm, adapted from a short-story, by Tennessee Williams, in the Artscape Arena, Cape Town, as a two hander with Marcel Meyer and Matthew Baldwin. One Arm was presented in repertory at Artscape, with Williams’ A Streetcar Named Desire, as part of the company’s Summer Season of World Theatre. Streetcar ended on February 12, so now One Arm is flying solo, until February 19, 2022.  The plays will be staged in repertory in the USA, in September 2022, at the Provincetown Tennessee Williams Theatre Festival. Abrahamse & Meyer Productions has a long association with the Provincetown Tennessee Williams Theatre Festival and for some time, its curator, David Kaplan has wanted the company to stage One Arm, which was presented in 2014, in Cape Town. The festival wanted both Streetcar and One Arm in its 2022 festival. Marcel Meyer, said in a recent interview with TheCapeRobyn as to the coupling of these two plays: “Both pieces were written and developed by Williams simultaneously. Streetcar premiered on Broadway in 1947 and One Arm was first published in 1948, so the pairing of these two works aims to celebrate the breadth and scope of Williams’ artistic vision while highlighting common themes and images found in both Streetcar and One Arm.” https://thecaperobyn.co.za/theatre-interview-much-anticipated-2022-revival-of-acclaimed-play-one-arm-staged-in-cape-town-and-provincetown-tennessee-williams-theatre-festival/

One Arm centres around, Oliver, a farm boy from Arkansas. He joins the navy in order to escape from an affair he is having with a married woman. He becomes a champion boxer but after losing his right arm in a car accident, he becomes a rent boy. Murdering a client, he lands up on death row. In in the narrative that unfolds on stage, we see Oliver’s interaction with a priest who visits him –listening to Oliver peeling back the layers of his life, as he reads through letters that people have sent him – people that he thought were ‘strangers’. In Abrahamse and Meyer’s stunning production of Streetcar, we see Blanche DuBois in an asylum, also peeling back the layers of her life. The two plays which may seem so different, have common threads which are knotted into the stories.

The company’s production of Streetcar is utterly seductive with alluring lighting and a mesmerising soundscape. In One Arm, we are faced with the cold and raw finality of death row. There are no saturated blasts of colour -blues and reds – that we get in Streetcar. We must face Oliver’s predominantly monochrome journey; where he is shrouded in shadow. One Arm was a short story by Williams and published privately. It was kept under the counter. In 1948, Williams had more freedom to talk about “taboo” issues – male sexuality – than he could in a play like Streetcar which was geared for mainstream audiences. One Arm is an intensely intimate piece – raw – without the release that we get by the fabulousness and verbosity of Blanche. There are many images which linger in both plays and which are depicted in the stage design of these productions – dangling light bulbs for example.

Marcel Meyer delivers a brilliant performance as Oliver – containing his disability or perhaps it is not disability – but his vulnerability- in a frame of stillness. The body is a container of anger, grief, regret, desire so in a sense, although he has no arm, his body is intact as a vessel which has a lot to convey. Production spoiler alert: Lighting is used to delineate the loss of limb. Oliver’s arm is not concealed by cloth or clothing. Meyer presents a masterclass in restraint – embodying emotion by gesture and voice. There is a potent sense of Oliver, hiding his loss of limb, in the dark; under the blanket of darkness. Again, there are resonances with Blanche in Streetcar who doesn’t want to be seen in daylight and feels comfortable in the cover of night. Matthew Baldwin as the young Lutheran Minister provides a comforting foil as Oliver wrestles with his memories and his current reality. Oliver does not want to be administered to and is rather disparaging of God and religion. Baldwin as the minister is chilled, non-judgmental and is there to listen.

One Arm is not an easy piece to watch. It does not contain the gaiety of Streetcar and the glam fabulousness of Blanche, in her outfits (even in the hospital setting in Abrahamse and Meyer’s production, she has a wardrobe). Oliver in One Arm is a body- minus an arm and that absence is a kind of totem. We must gaze at him and image him as he images himself in relation to what he discovers about himself, as the narrative unwraps itself. Plot spoiler alert: Oliver finds comfort in the end, when he realises that his interactions with clients meant something to them. He touched lives, without realising it. On Death Row, sifting through his memories, brings him respite as he faces his last breath and becomes whole again. Tip: Sit near the front of the auditorium in order to see the beautiful set, which contains extracts from the letters (drawn onto the stage) and also to be able to hear all the dialogue.

In the interview with Meyer on TheCapeRobyn, Meyer mused: “Williams was instrumental in redefining how the male body could be presented and portrayed in mainstream media. So, all the handsome Insta boys, TikTokkers and Tweeters owe a debt of gratitude to Mr. Williams for facilitating this acceptance of the male body as something desirable and gaze worthy.” [https://thecaperobyn.co.za/theatre-interview-much-anticipated-2022-revival-of-acclaimed-play-one-arm-staged-in-cape-town-and-provincetown-tennessee-williams-theatre-festival/] While watching One Arm, what came to mind was the famous Greek Sculpture of Venus de Milo (The Venus de Milo – is the marble statue – without arms – depicting Aphrodite – the Greek goddess of love and beauty and fertility. Venus is the Roman name for the god. The Venus de Milo dates to the Hellenistic period between circa 130 and 100 BCE. Venus was the goddess of Roman mythology- love, sex, beauty, and fertility. Her Greek counterpart – Aphrodite- was the goddess of victory, fertility, and prostitution.)

Art historians tell us that the Venus is such a powerful image as we don’t see the absence but in our mind, we imagine the rest of the body. We complete her body in our mind and she becomes whole, fertile and desirable, again. Watching Meyer- with the stump hovering and I was pulled into imaging him as the virile champion boxer. Meyer’s position of the body is not dissimilar to playing a classical statue on a plinth. Oliver has been a stud – a sturdy and virile farm lad. Then he has an affair with a married woman and then becomes a celebrity as a boxer an object of adoration, of desire. As a rent boy, he is also desired and used; sized up. In One Arm, minus a limb, we watch him, focussed in on himself; without the gaze of the public; his clients.

Meyer replied in my query regarding referencing fragmented classical sculptures – frequently with limbs broken off, missing: “Yes, there are two references in the short story, where Williams describes Oliver as looking like a broken statue of Apollo, so yes, he was referencing classical Greek and Roman god and goddess sculptures, with limbs missing. That was very much the image that we were going for- impassive and stone. We use fragments of that in the set- some of that is written out in the calligraphy on the set. That was very much in his mind – Apollo – in marble with a limb or limbs missing. This was very much in mind when Williams was writing One Arm.” Apollo was the hunter- the son of Zeus and twin of Artemis- the goddess of the hunt. He was god of archery, dance, music, truth, prophecy and also of healing and ending disease. In One Arm, Oliver has a limb missing. He is broken and then through his connection with letters sent to him on death row, through the “kindness of strangers” (as in Streetcar), he is able to re-assemble his body again to line up with his soul which is intact. One Arm is not “easy” theatre. It is theatre which is performative – almost like watching an installation of an immovable statue – coming to life – re-calibrating itself. Do not look away as Oliver transcends disability, sexual and class slurs and finds a space to be whole again- and beautiful. The image of an armless statue of a mythical Greek or Roman god – its absence and the presence – stayed with me. I couldn’t stop thinking about the play. 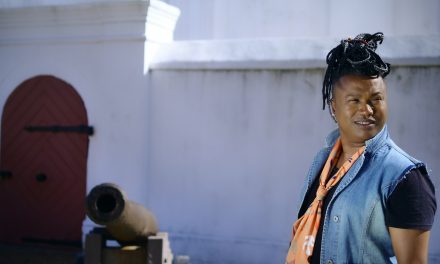 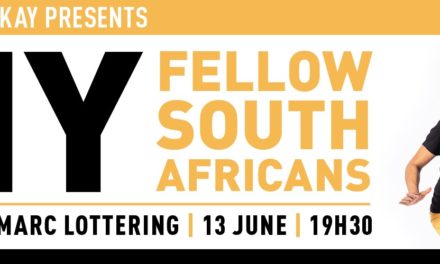 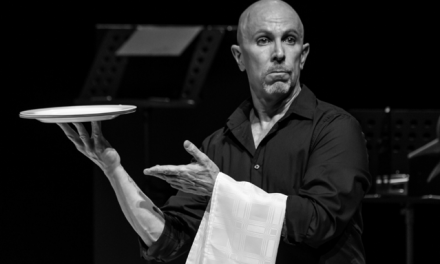 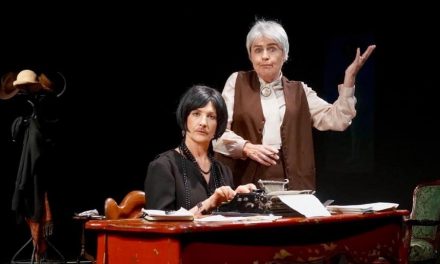 Theatre review: Spirited portrait of Gertrude Stein And A Companion, rips and riffs along at a clip