Theatre review: Alchemy of process and performance in Anotherkind, NAF 2021 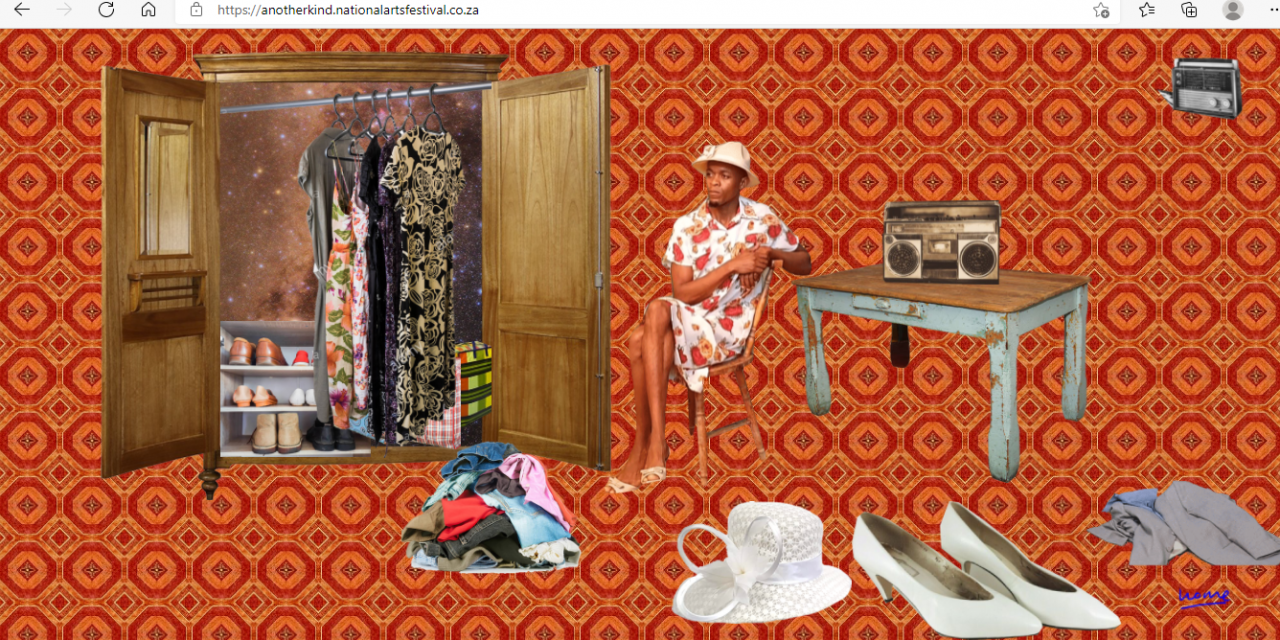 With Anotherkind, Amy Louise Wilson has conjured up an immersive online theatre experience which although framed by grief, is ultimately playful and a celebration of creativity, resilience and imagination of artists who have continued to create and make theatre, during the pandemic, Anotherkind posits ‘another kind of theatre’, a platform which can be activated through screen-sharing, from a theatre company to an audience. Anotherkind is an alchemy of process and performance- with live-typing (read on for more on that). Wilson says that Anotherkind is “not about making a product… It’s about process…It is an open space.” There is a lot to mull on in Anotherkind and this is not a quickie review. Before you read on, note that the last opportunity to see Anotherkind at the National Arts Festival 2021, is tonight, July 17, at 7pm.

Let us explain about the genesis of this “open space” performance. Anotherkind started off as a play to be staged in a theatre, with an audience-in-attendance. In 2020, Wilson won the 2020 Distell National Playwright Competition for her play, Another Kind of Dying. A key part of prize is that the playwright gets the opportunity to stage the play staged at the National Arts Festival in Makhanda in the Eastern Cape. The plan was that after the premiere at the 2020 NAF, the play would go on to seasons at The Market in Johannesburg and at The Fugard in Cape Town. Covid and lockdown brought everything to a grinding halt. [The Fugard announced its permanent closure, earlier this year, 2021]. Wilson was not able to cast the play. For the online NAF 2020, Wilson presented a virtual 360 degree walk through of her play. With lockdown continuing in 2021, she could see that it was unlikely that the play would be staged anytime soon and the play shifted direction into a process piece, Anotherkind.

Wilson embarked on a six week theatre lab with actors, developing the script into Anotherkind – not the play as originally envisioned but versions and possibilities of how it could be staged, one day. Wilson brought her source material to a theatre lab and the artists worked with the material. From the lab, she assembled a collage of images and ideas on her computer- an archive- and brought on board a creative team: Francois Knoetze (scenography and art design; Gugulethu Duma (sound and original composition); Duduetsang Lamola (collage art); Zara Julius & KONJO (playlist) and Francis Burger (website).

In early 2021, a Live Makhanda was on the boards, with a socially/physically distanced audience-in-attendance. Wilson thought it would be cool for her to sit in the auditorium and screen-share the archive of Anotherkind, with the audience, via a monitor on stage. She would be live-typing as images and scenes spooled out on the monitor. There would be the opportunity to add and reflect; in the moment and type in her thoughts. With increased lockdown regulations and the spike of the Delta Variant, the NAF announced that it was canning audience-in-attendance performances. Artists had the choice to stage their work in Makhanda as a live stream and/or as video-on-demand. Wilson could not see the point of sitting in the theatre, at her computer; sharing her screen and having that screen beamed out online. She reckoned that it would make more sense to live stream Anotherkind, on the NAF website and screen-share directly to the viewer.  She would still be present, live-typing as images scrolled across her screen but it would be direct to the viewer, watching online – as a “live curated experience”. She describes the approach as a “live-typed essay”; a “scrolling tour” as she provides context and comment “through the archive of filmed pieces”.

Initially, there was tremendous grief for Wilson as she shifted gears in taking her play from ‘fully formed, structured play” to a digital archive of images, voice, ideas, movement. But what started off as “the death of her play” has given away to a re-birth and “re-imagining” of the narrative. Wilson’s ‘original’ play, Another Kind of Dying, was written for actor Aphiwe Livi. He was in mind, when she conceived the story. At the heart of the piece is Silumko, who after the death of his father, moves from rural Eastern Cape to the big city, Johannesburg.  It is a “coming-of-age story about identity, perceptions of patriarchy and masculinity in South Africa and the burdens they impose”, Wilson muses.  By moving – physically and emotionally – Silumko has to “shed” his expectations and find another kind of meaning from his new life; away from home. The shock of the big city is emotionally rendered in Anotherkind – as Silumko charts his way. In Anotherkind, Wilson says: “We have tried to mirror that in the way the new work has been created.” There is a chorus. His conscious? His anxieties? It is beautiful and stirring.

There is much happening in Anotherkind- narratives spooling across the screen and on the side, scrolling down, we see Wilson talking to us, processing, questioning; prompting us to consider what she is presenting. What do we think? Are we familiar with the books and films that she is presenting on her screen – which went into shaping her protagonist?

I love the playing and playfulness in Anotherkind. It reminds me of Fuzzy -Felt – a board game for children. Felt shapes (a flower, animal) are placed on a board. There are various story boards – schoolyard, farmyard etc. It is an old-school version of copy and paste. One holds the images and often battles to make them stick. They may fall off or dangle. It is fun and fragile. At any point, the picture may shift and that is exciting. Wilson said that she did not have Fuzzy Felt in mind but she does make collages. She wanted to bring an old -school touch to Anotherkind and yes, a sense of play and playing.

For me, Anotherkind imbues technology with a personal aesthetic which is emotional; tangible. We get the emotional turmoil of Silumko in the big city; his grief, pain, joy as pieces and fragments are scattered across the screen. We can feel Wilson’s grief in not being able to stage the play in a theatre, now and the grief and anxieties of the masked actors, working in the pandemic.

In tandem with the narrative, Wilson provides a meta-text essay on interrogating films like Jim Goes to Joburg– the imaging of Black men by white writers, during Apartheid.  [The 1949 feature was directed by Donald Swanson. One of its stars was Dolly Rathebe.] It is complicated and problematic- appropriation of other peoples’ stories/cultures/identities. In rendering Silumko’s story, in theatre, South Africa 2021; there is a vital examination of his narrative in relation to the past of representation of Black men in the canon of South African film and literature. Watching a “finished” play, we would not usually be privy to the process and the issues that were considered while staging that production. There might be a director’s note in the programme, with hints but that is about it.

In Anotherkind, we are given first-hand insights into the “open space” of developing this play, during the pandemic and how it has been shaped by source material and the actors themselves; the past; uncertain present and unpredictable future. Technology could have easily made this into an electronic archive– flashing images – difficult to decode. Instead, Wilson has assembled a tactile imaging of her script. The playing and playfulness pulls the viewer into the story and process. In a sense, it is taking the concept of a staged-reading to another domain. Usually, we see staged readings in theatres, with actors reading from a script, with some props or costumes to give an idea of design. In the pandemic, we have seen staged readings; plays in development on Zoom –with actors in bubbles, miked up and saying their lines.

Anotherkind opens up a new vista for a staged reading/showcase – a thrilling approach to share a play in development and how the performers and creatives are working with source material, design (lighting, sound, costumes), movement, voice, text. Anotherkind is on one level a document and documentary of a play-in-process but it also a masterclass in how to approach the staging of a play – and the medium of presentation/staging. At the moment, online is the stage. Amy Louise Wilson shares her screen with us. However, rather than simply presenting a recording of her archive, each live stream is accompanied by her live-typing, on screen. The live-typing ensures that each live stream performance is fresh – as it is informed by what is going on and how Wilson references that as she shares the archive of Anotherkind. Each time, she is presents the archive of Anotherkind, there will be added resonances in relation to the trajectory of the pandemic and the state of theatre.

The last live stream on NAF 2021 is tonight, July 17, 2021 at 7pm. Do not miss. There will not be a recording available to watch, during the festival. 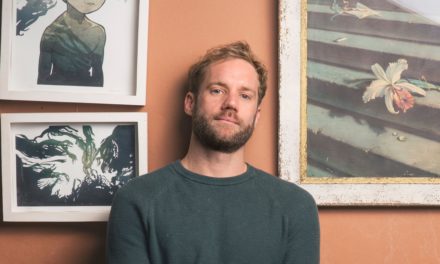 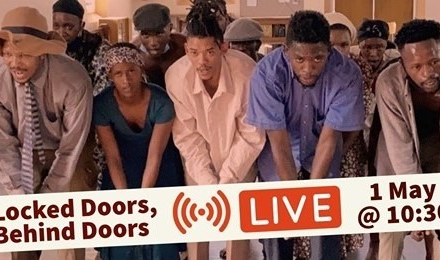 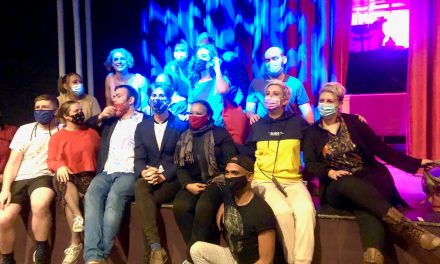 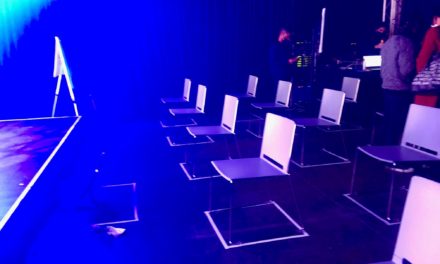